What I love about Switzerland… 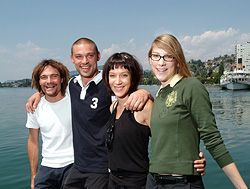 Are you interested in a course in Montreux, French Switzerland, near the Lake Geneva?

I have been to French Switzerland a number of times, as I have cousins and my beloved goddaughter there. I think it’s a very nice region, with beautiful landscape. I always envy my cousins for living so close to ski resorts. I also love having a walk by Lake Geneva. When I first went there, although it was sunny, the clouds were hiding the mountains, so it looked like the sea. But when I came back, I could see the mountains behind, and it’s such a unique view – I can’t remember seeing it anywhere else! Wherever you are in Switzerland, you feel very far away from pollution, noise, poverty and crime. It sounds like a cliché, and I’m not saying that Switzerland is completely free of those things, but that’s the impression I have every time I return there.

The first thing that French people joke about is the general obedience of the Swiss. I have a funny anecdote: one day my dad was trying to find somewhere to park and asked the hotel receptionist for assistance. The assistant told him that he had to pay and display every other hour. He asked her if the police would go somewhere prohibited, and she answered no. So what he did was park illegally. The receptionist told him that it was very French of him, but the strategy worked, because he didn’t get a fine!

They don’t speak a dialect, but still there are a few differences. The accent is of course different, quite close to the Savoy accent. We often say that the Swiss are slow, probably because they usually speak slowly, which is in fact an advantage for a foreigner learning a difficult language. I used to make fun of my cousins and people I knew there until they told me that they also found my accent was weird! They also count slightly differently. For example, 70 is “septante” and not “soixante-dix” like in France. Although I always say “soixante-dix”, being French, I think that their counting is much easier and logical. They also have been strong enough to resist some Anglicisms like “chewing-gum”, which they call “chiquelette”.