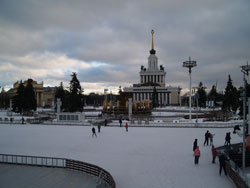 As December approaches, I can’t help but think about one thing and one thing alone: Christmas! British Christmas traditions are well known to me since I was born and raised in the UK. Finding out what happens during a Russian Christmas was exciting and a little different to what I expected!

Many Russians, though by no means all, still acknowledge Christmas. A Russian Christmas falls on the 7th January due to their use of the Orthodox Christian calendar. For many this is not the main event of winter. New Year, however, is an extravaganza!

Of course the build up starts before Christmas! Shops stock their festive ware from the start of November. Seasonal ice skating rinks pop up in parks and even on Red Square from the end of autumn. Christmas trees (or New Year trees as they are known here) are usually put up in homes around two weeks before the main event. However, some Russians are known for still having their decorations up around March!

Traditional glass decorations, and especially vintage Soviet ones you can sometimes find in flea markets, are some of the most beautiful, with designs such as cosmonauts and characters from Russian folklore and fairy tales. Most families have a special set of ornaments that have been in the family for generations. People get in the spirit with skating, attending The Nutcracker at the ballet and watching favourite seasonal films such as The Irony of Fate and Carnival Night.

On New Year’s Eve itself, families and friends gather, and at around 9 or 10 in the evening they feast on a spread of Russian salads and dishes. No New Year table would be complete without Olivier Salad, with cubed cooked potato and carrot, dill pickles, green peas, eggs and ham in mayonnaise seasoned with a hint of mustard. Other staples include dressed herring (in Russian селёдка под шубой, which literally translates to “herring under a fur coat”), mandarins and, of course, champagne. A meal with Russian company is an opportunity to raise your glass and make a toast every minute. New Year is no exception as everyone remembers the year that passed and toasts to the future. 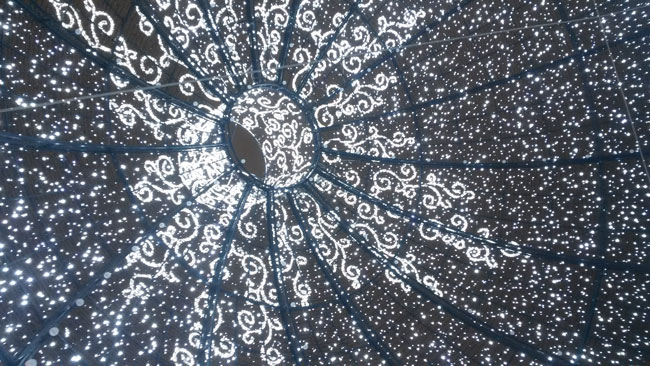 At 23:55 the President of the Russian Federation makes a speech that is shown on every single television channel (yes, really!). Before this they show Spasskaya Bashnya – the main clock tower of the Kremlin on Red Square. That is when the kuranty, or chiming of the clock and the countdown begins. Actually, it is more of a countup, as Russians start from one and count the strikes up to twelve, and within this time it is crucial that you’ve popped the champagne cork! Another uniquely Russian tradition for this time is to quickly write down your New Year wish on a piece of paper, burn it, drop the ashes and remnants in your champagne glass and down the lot… that is a lot to complete in twelve seconds, but Russians are evidently very capable when it comes to activities involving alcohol!

For some families and friends, now is the time to open presents and to head outside. The streets are alive with everyone greeting neighbours and setting off fireworks. For small children, presents wait until morning, to give Ded Moroz (literally Old Man or Grandfather Frost), the Russian Father Christmas, time to deliver them with the help of his granddaughter Snegurochka, the snow maiden. The celebrations continue through the night and for those that want to call it a day, getting to sleep can be tricky with the continuous fireworks exploding across each city. 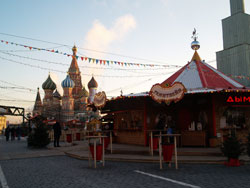 New Year’s day is, other than being packed with presents for the youngsters, a day of rest. Even Moscow is like a ghost town. More or less everything is closed, except for parks and ice skating rinks. Anyone who got enough sleep or didn’t drink too much champagne and is brave enough to venture out can often be found taking festive strolls or showing off their skating skills.

For the following few days, some people make the rounds visiting family and friends and eating up the leftovers. Christmas on the 7th can involve a family meal, but the most recognisable tradition is the midnight mass service. The most famous of these is shown on TV live from the Cathedral of Christ Our Saviour in Moscow by Patriarch Kirill, with the President in attendance.

So Russian Christmas, or rather, Russian New Year is quite a sight to behold. If you’ve been dreaming of a white Christmas, head on out to Russia for the experience of a lifetime at the most wonderful time of the year!

You can study Russian in Russia with Apple Languages in St. Petersburg or Moscow.