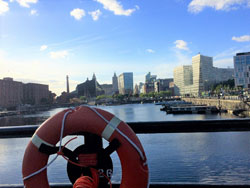 At last, my first day in Liverpool, the Sunday before my English course starts, has arrived! I woke early as I was excited for my trip and, as they say, the early bird catches the worm! I prepared my luggage and jumped onto a train for 11:30AM. The journey from Loughborough to Liverpool was longer than expected: three hours and three changes in total, but it was impossible to get bored as the views were constantly changing! During the longer routes I was able to go over the Peak District’s pictures that I’d taken the day before. Make sure you go to the peak district if you get the chance whilst in the UK!

Speaking of the peak district, whilst on the train I found this beautiful poem by William Wordsworth, called Chatsworth, dedicated to one of England’s greatest stately homes and a place within the Peak District that I really enjoyed visiting.

It was a good reason to read, comprehend and translate a relevant and interesting piece of English literature:

Chatsworth – a poem by William Wordsworth 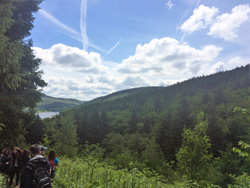 Chatsworth! thy stately mansion and the pride
Of thy domain, strange contrast do present
To house and home in many a craggy rent
Of the wild Peak; where new-born waters glide
Through fields whose thrifty occupants abide
As in a dear and chosen banishment,
With every semblance of entire content;
So kind is simple Nature, fairly tried!
Yet he whose heart in childhood gave her troth
To pastoral dales, thin set with modest farms,
May learn, if judgement strengthen with his growth,
That not for Fancy only pomp hath charms;
And, strenuous to protect from lawless harms
The extremes of favoured life, may honour both. 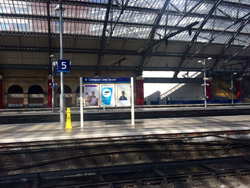 It had now started to rain in the lush countryside that was racing past the train’s window. There’s a reason why England is beautifully green all year round! I wasn’t worried about a little rain and had learnt to understand the British weather after being in the UK for a few months! In fact, by the time I passed the John Lennon Airport, besides smiling about the great name of Liverpool’s main Airport, I found there was a beautiful spring sunshine.

Finally, I arrived at Lime Street Station. The first impression with the city is stunning. I wasn’t able to do much sightseeing as I wanted to go to straight to my student residence accommodation. I had the address from the travel information that Apple Languages had sent to me and needed to go and get the keys and leave my luggage. 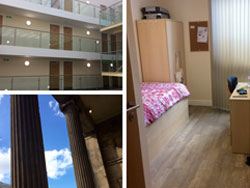 I swear to you, I passed by the front of the door to the residence a few times as I didn’t quite believe that it was my accommodation. It became clear that it was the right one, with its majestic gate, an architectural style similar to Greek old temples. I rang the bell and a delightful young man opened the door and warmly invited me to go in. The place was so bright and so clean, the common spaces were large and everything was extraordinarily modern. It was much better than my room in Loughborough! The nice guy, Alex, was very kind; he showed me around, the facilities, my room (Amazing!), the kitchen and gave me the keys. I couldn’t actually believe it. You imagine certain things for a student residence accommodation, but this was real luxury! 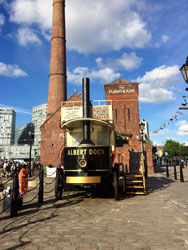 I quickly unpacked my luggage and rushed in to the city centre. Liverpool is a typical British city, with lively streets full of shops, but it is, at the same-time, a rare example of a classical, historical city!  Liverpool has kept the charm and the liveliness of an old important harbour city and it was this historical past that made me want to explore Albert Dock first of all.

Declared a UNESCO World Heritage Site, the redeveloped harbour of Liverpool is truly a wonder: ancient boats in the foreground and modern building on the background. And again, the Maritime Museum, the Tate Gallery and the Beatles Museum, all placed along a stunning promenade on the seafront, characterized by benches and padlocks, seen in other major cities and used as a token of love by romantic couples.

The Wheel of Liverpool 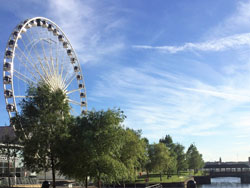 I then saw the huge ‘Wheel of Liverpool’. It’s not too expensive for students (just £7.50), so I didn’t think  about it too long and jumped right on it! A city view from the top is right what I needed to help orientate and build up confidence with the districts. It was also a good place to zone out and relax after the recent long train journey. Liverpool from this vantage point is even more extraordinary!

You can see many things, including:
The two Cathedrals – Christ Church, the Anglican one, and the Metropolitan Cathedral.
The Three Graces – the Royal Liver Building with its two twin towers characterized by the Liver Birds, a symbol of the city.
The Cunard Building – built to host  the Cunard Steamship Company and the Port of Liverpool Building and, by the end, I saw the sunset across the sea! What more could you want?

After all this sightseeing I started to get hungry so, after a stop in the supermarket, which was so close to my accommodation, I started to cook a tasty Italian dinner: risotto! Little by little, during the evening, I met my flatmates and future classmates at the English language school. They are all very nice, friendly and with a strong desire to have conversations in English to improve their communicative skills.

I’ve gone to sleep very happy and already sure that the week in Liverpool will be outstanding, the best possible start to my first day in Liverpool!