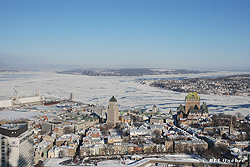 There are not enough adjectives for describing my stay in Quebec. I can just say that I’ve discovered another world there! I live in Spain, very close to the French border and when I decided to live in a French speaking country to improve my French level, I thought Canada would be the perfect destination for discovering a new culture and French accent and what I’ve found there has exceed my expectations! From the people to the food or even the new winter weather experience have been fascinating!

Actually, I wouldn’t have thought that it could be so cold! And then you could say “Yes, but you’re a Spanish girl! You don’t know anything about cold” Well…that might be true, but we reached even -50° in February! I was wearing all the clothes I had brought: thermal trousers and t-shirt, two pairs of trousers, a long-sleeved shirt, a jumper, a huge fur coat, a scarf, a hat and gloves and I could still feel the “cool” air going through them. It was a good and exciting experience that I could stand just for an hour thanks to the caribou (a typical and strong drink that I wouldn’t have drunk if it hadn’t help me to warm up), while the carnival parade was crossing Quebec’s streets. 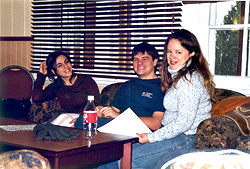 I have to admit that I wouldn’t be able to live in such a cold and snowy place for the rest of my life, but as I knew I was going to be there just for some months it was great fun and I tried to make the best of it. I bought a second hand pair of ice-skates and used to go ice-skating outdoors. My favourite places were an ice rink close to the city walls where I met a lot of Quebéquois families trying to teach their children how to skate, and another rink close to Le château Frontenac, just in front of the frozen Saint Laurent River, I felt I was in a fairy tale! I never dare to skate on frozen lakes or even on the river, I was so afraid it would crack and I would find myself surrounded by trouts in a freezing water! Another thing I really enjoyed was wandering around and admire the ice sculptures at Carnival time! I even met some of the artist that were sculpting them and had a nice chat with them. One of them, called Sophie invited me to join her and her husband for brunch! We were to the “Concorde” an amazing hotel whose restaurant is in the highest floor of the building and turns around! I was so good! I ate a lot of lovely things whilst I was having a nice chat with a québequois couple and admiring the whole white city in a really sunny (though freezing) day.

I learnt LOADS of French in Quebec! The teachers were great and I really found that my French improved a lot while I was there – practising it every day for everyday things and with LOTS of new-found friends!

When people ask me “what did you like the most in there?” it’s really hard for me to answer. It’s difficult to choose among the huge amount of nice things that I saw and made and discovered there, but actually I have to say that people are my best souvenir from Quebec. More than anything else, they really impressed me. They were so nice and welcoming with me! They were really interested in knowing people from other cultures, and they used to talk to me wherever I went: in the bus, at the shopping centres, in the streets… I got the chance to met loads of them and I am proud of saying that I’ve got some good friends in Quebec!