Eating out in Paris? Here’s a few tips from a local… 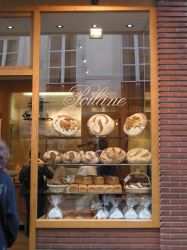 Need some tips on where to eat out during your language course in Paris? Well, Paris is just like London: there is a wide choice, with restaurants from all over the world. That’s quite normal for a capital city! But just let me tell you about what makes Paris special!

I just spent the weekend there, and it’s starting to be the season for sitting outside a terrace café. I love to go there in the morning, and have a crepe (French pancake) for breakfast. This is typically French (Breton to be accurate), but French usually love it, especially me! If you want to try it, there is no need to look very far, because Paris is full of terrace cafés, whether near the Eiffel Tower, Montmartre, or the Champs Elysées! The advantage of the morning is that there are not too many people, there is traffic but it’s not too noisy, and if there is bright sunshine, then it really is a must-do! They usually stay open and busy quite late, for anyone wishing a nice cold drink after seeing Paris by night.

If you want to try a savoury crepe, I strongly recommend you to go to Montparnasse. There are a couple of streets where every other shop is actually a creperie ! It’s the most Breton part of Paris, and it shares everything with Brittany, except for the sea, and the landscape, which are slightly different. It’s most likely like this because most trains from Brittany to Paris arrive in the Monparnasse station. No kidding, when you leave the metro station, you can hear sea gulls! Although I studied in Montparnasse for 4 years, it still surprises me when I go back! 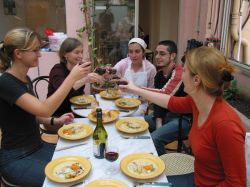 Alternatively, do you like French steak? Then I strongly recommend the Hippopotamus restaurants. It’s actually a chain throughout Paris. When I told my English friend it was a chain, he thought it would be similar to Maccy D’s. Good job I insisted on taking him anyway, and do you know what he ended up saying? He had the best entrecote he ever had in his life! Most people order their steaks with a load of chips, but Hippopotamus is definitely not chips with everything! You can have beans, rice or a jacket potato instead!

For me this is not fast food and is much more than an American-like steakhouse. There are a wide variety of starters, puddings and above all a “carte des vins” (wine list)!

When it’s hot and sunny, you may like an ice cream. I strongly recommend the Berthillon ice creams. The main Bertillon store is unfortunately closed in July and August, as they make enough profit throughout the year, but their ice creams can be found elsewhere, and they are said to be the best in Paris. You will notice that the Parisien ice cream shops are usually attractive.

All in all, Paris is not cheap, but it’s worth splashing out for fun during your holidays. If you are on a language course in Paris, with bed-end-breakfast accommodation, then lucky you – make the most of it!