Things to do in Brest 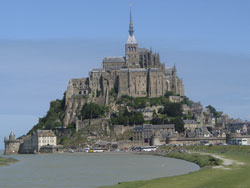 Brest is the perfect location to have a short break in France. Come and have a complete change of scenery, fill your lungs with fresh, Atlantic Ocean air and enjoy amazing landscapes off the west coast of France.

If you like fish and seafood, Brest is a place for you! Thanks to its coastal location, there are a lot of seafood restaurants where you can savour a delicious seafood platter with crabs, langoustines, oysters and typical French steamed mussels! If you prefer to observe fish than eat them, you can go to the Océanopolis. A lot of tourists and marine-life lovers come from all over the world in order to visit it! It is not just an aquarium: there are three pavilions dedicated to the polar, tropical and temperate marine ecosystems, you will have a complete immersion in an underwater universe to discover the flora and fauna of oceans, and have the opportunity to see some really interesting exhibitions about marine biodiversity. You can even touch some species if you want to!

It’s impossible to talk about Brest without writing about its port. Take a little walk on the dockside and admire lighthouses, boats and sailing boats, take a picture of the Pont de Recouvrance, which was the largest vertical-lift bridge in Europe. Then, go to the Château de Brest (Brest’s Castle), one of the major monuments of Brittany where there is the Musée de la Marine  (National Navy Museum), a must see for maritime and history fans. This fortified castle was originally built during the Ancient Rome period. Since this time, it has been modified many times but it still keeps 17 century of history inside! Moreover, you will have amazing views of Brest’s harbour when you visit it.

Brest is also the perfect location to take part in water sports such as surfing, diving or sailboarding! Anything related to the sea is possible! A great excursion is to go hiking on the Albert Louppe Bridge or in the countryside where you will be able to see a different kind of beautiful landscapes. 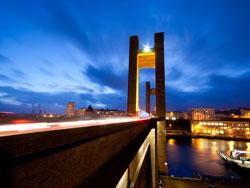 In summer, especially during the evening in the harbour and nearby streets, there are some cultural events and free concerts! The nightlife is more lively than usual and “les Bretons” hang out in pubs and “crêperies” to eat crêpes, galettes and drink cider. Every day, there are local markets where you can buy some traditional French food: crêpes, galettes, or cakes such as Far Breton or Kouign-Amann (literally butter cake). My favourite are the caramels au beurre sale!

Each August since 1971, has been taking place the well-known Inter-Celtic festival of Lorient, located in one hour’s drive from Brest is something not to miss for Brittany inhabitants!

This city was heavily demolished during the World War II during the Battle for Brest in 1944 -after the Allied invasion of Normandy, which had destroyed the huge German submarine base. It was of course, rebuilt after the war. Nevertheless, Brest and Brittany have always kept their strong cultural identity with their Celtic cultural heritage (nowadays, it is still considered as one of the six Celtic Nations).

A French city with Celtic influences, Brest is unique and a very good location to learn French and discover the French and the Breton cultures at the same time!