A German course in Hamburg – a very curious experience! 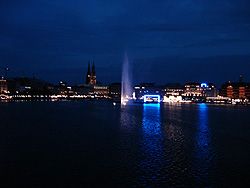 Tell anyone that you’re visiting Hamburg, and chances are that they will say something like ‘Ah, the Reeperbahn!’ often accompanied with a smile and a wink! However, although Hamburg’s infamous red light district is undoubtedly an important part of Hamburg’s character (actively promoted by the tourist board) there is so much more to see and do in this wonderful city!

Getting to Hamburg is easy. The low cost airlines generally fly to Lubeck which is an hour’s drive from Hamburg by shuttle bus (or approximately half that time if you get a lift as I did in a big BMW and take the autobahn!). You can also see pictures and information on the German language school in Hamburg I visited.

Although Hamburg is not on the coast, it still has a very strong maritime ‘feel’ thanks to two boating lakes in the centre of the city and the enormous commercial port. 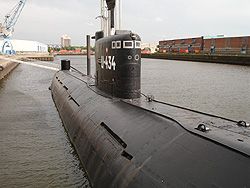 The highlight of my trip was a brief tour on board the U-434, a Russian submarine used during the Cold War for spying on the East Coast of the US and which now serves as a museum. It’s great fun clambering up and down the ladders and swinging through hatches as you explore the boat. That is until you realise that this was home for 78 men for months at a time – the living conditions must have been terrifying!

Hamburg is also a very beautiful city, with large leafy parks often busy with people relaxing in the shade, having a picnic or playing football.

Although most of the city is very modern (a direct result of the heavy bombing the city was subjected to during the war), Hamburg has fortunately managed to retain many of its old Hanseatic office buildings, warehouses, canals and bridges, all of which make the city a joy to explore on foot.

If it’s nightlife you’re looking for, then Hamburg has it all! Many bars and clubs stay open until 5am in the morning and that’s during the week! At the weekend, you can party around the clock!

At this point, I have to mention St. Pauli and the Reeperbahn again, as these are the areas where many the most trendy clubs and the best nightlife (of the mainstream variety!) are located.

One of the more unusual experiences during my trip was the Hamburg City Beach Club which is on the bank of the Elba River and which combines a beach club with a bar/restaurant. Sand has been imported and used to create a ‘beach’ so that visitors can relax in one of the beach chairs and enjoy a Caribbean cocktail whilst watching the sunset on this fascinating and slightly surreal city!