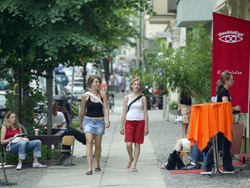 Berlin is not only the capital of Germany but also the capital of arts and culture! Since Berlin has, due its history, no real city centre, there are lots of places all over the city where you will find the true Berlin experience.

One of those places is Prenzlauer Berg. Prenzlauer Berg (which means ‘hill of Prenzlau’) is a quarter of Berlin that is especially popular among students, young people and artists. Forget London’s Soho or New York’s Brooklyn – Prenzlauer Berg is where young aspiring artists live and work!

The scenic quarter is famous for its subculture, lively nightlife and is home to many cultural initiatives. Prenzlauer Berg is also a melting pot of different cultures! You will find plenty of little Turkish bars, art galleries from American artists or cafes that offer real Italian gelato. If you are an international student at the German language school in Prenzlauer Berg, you will have loads of fun soaking up the international flair.

It’s probably the best to visit Berlin during summer. You can enjoy homemade ice cream on one the myriads of flea markets that pop up everywhere. The most popular flea market of Berlin can be found in Prenzlauer Berg: the Mauerpark flea market. It is located right in Mauerpark (meaning ‘wall park’) which is a large green area just where the Berlin wall used to be. Every Sunday from 10am to 8pm hundreds of stands sell vintage clothes or self made products, arts and crafts. Make sure to bring cash and the ability to negotiate a good price. 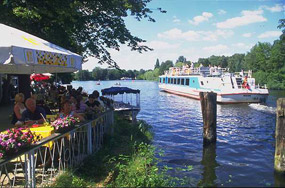 On a warm summer day you could also soak up the sun at one of the city’s beaches! There are two big rivers in Berlin – Spree and Havel and close to the campus of the language school (Berlin Campus – Prenzlauer Berg) is even a lake – the Weissensee.

The Prenzlauer Berg area is known for many places such as Kollwitz place or Helmholtz place, where there are various shops and cafes. The ‘Kulturbrauerei’ (culture brewery) is the centre of cultural life in Prenzlauer Berg. It is a huge building complex that used to be the brewery for Schultheiss beer. Nowadays no beer is brewed here anymore but there is a cinema, a theater, three clubs and the location is used for readings and live concerts.

Moreover, Prenzlauer Berg is known for its little independent shops that have to compete with large shopping malls, which emerge more and more in the German capital. Nevertheless Prenzlauer Berg has lost nothing of its unique character and charm.