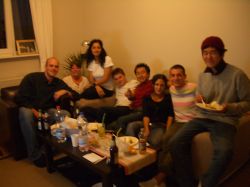 It’s now Sunday; my first week of learning German in Hamburg and most of the weekend is over and I am actually looking forward to going back to school tomorrow! I was surprised with how much I could learn in my first week but also how quickly I could make some great friends.

The class I am in contains a really nice group of people and Friday night we all went to a house party of a Swedish-Iranian women who lives in Hamburg with her German boyfriend. We met at Barmbek subway and didn’t have the best directions, but after asking German taxi drivers for the way… in German… we found it very quickly! There were exactly (she’s counted) 92 steps to her apartment in an old German style building, so the first drink of the night was very welcome!

We all had a really good time and people bought various foods from their respective countries for us to eat. One of the talking points of the night came from “Michael” the Chinese student whose import and export company have sponsored his studies in Hamburg. It turns out he is also a Martial Arts teacher – a 6th Dan Wushu expert – almost unheard of for a 24 year old! So naturally we all wanted him to show us some moves but better yet he showed us a video that an American TV company had made about him.

We finished the night by revisiting St. Pauli´s and went to an Irish bar – Molly Malone for some nice live music. 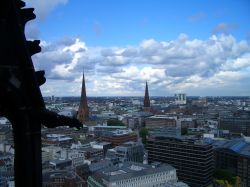 Saturday was spent at the Duckstein open-air beer and Jazz Music festival that also had some excellent, reasonably priced food. We stayed off the beer but had some nice Mezzo Mix (Cola mixed with Fanta). I also had a steak mit Salat and then we shared some Flammkuchen – yummy!

Once we got tired of Jazz music we strolled over to and also went up the impressive Gothic Saint Nikolai memorial – a once large church that was bombed in the war. The spire remains and you can go up it in a lift for 3 Euros – I strongly recommend it! The views are great and it’s nice to undertand a little more about Hamburg’s history.

After St. Nokolai we took a short subway trip to the Cinemax near Dammtor to see what films were playing but decided to leave that until tonight. This morning we strolled down to Christuskirche for a really tasty brunch – German style – which involves breadrolls, a cheese and ham platter, a selection of fruit and a boiled egg. Makes a nice change from the fried eggs bacon and beans I normally have in England!

Now I have to do my Hausaufgabe (homework) before the cinema – but what to watch?