Hamburg: my classmates made the local news! 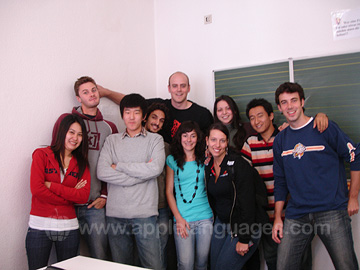 Class finished at 1 pm on 1st August and the weather was very nice. We decided (since it was the end of the week and legal in Germany) to buy a beer and sit in the town centre – overlooking the Binenalster.

I left to go pick up some keys from a friend and whilst I was gone the local news team took my seat and interviewed my German course classmates on the weather in Hamburg. Normally summers in Hamburg are beautiful. Today was no exception but the last week has been a little less than perfect. Hear what my friend has to say 27 seconds (51 if counting down) into the video below. Next to him is another guy from my class who started this week.

This made the local news, known as Hamburg 1 and was shown about 6 times from 5 onwards. The news team interviewed him at 2pm and he was on the news at 5pm. That’s German efficiency for you! Shame they picked the only 5 minutes I wasn’t there, otherwise it could have been me!