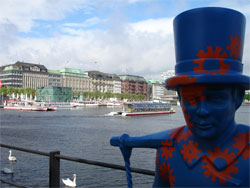 If you love live music, you will certainly enjoy a stay in Hamburg! Naturally, big cities are always more frequently visited by musicians on tour, and the north German metropolis is one of the cities in Germany where they usually stop. But there are also some things that are special about Hamburg’s music culture and I’d like to share some of my experiences here.

As far as genres are concerned, there is really something for every taste. Of course, Hamburg is famous as a host to several award-winning musicals and it’s actually the third biggest musical location in the world, only outdone by New York and London. As for classical music, you have the Music hall Hamburg (Laeiszhalle) where both the Philharmoniker Hamburg and the North German Radio Symphony Orchestra play regularly. The Elbphilharmonie Hamburg is still under construction at the time of writing. This massive concert hall located at the harbour in central Hamburg calls itself “Europe’s largest cultural construction site”.

Myself, I prefer the more personal experience of listening to a small band play their own songs on stage, be it pop, rock or alternative music. I remember one concert in particular, where I was not only enthralled by the music, but also very much by the venue, namely the open-air stage in the Hamburg Stadtpark. Since it is open-air, concerts only take place in this location in the period from May to September every year. And what’s nicer than spending a summer evening in the park, having a beer with friends and listening to your favourite band play live on stage? I can’t tell… The circular green, where the audience stands, fits around 4,000 people and has thus only a medium size. It’s separated from the rest of the park by large hedges which makes it feel even more private, and which also improves the quality of sound. If I ever get the chance to go there again, I will! 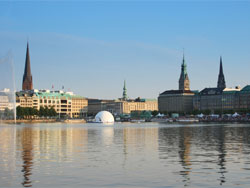 A whole other place in the same city is Große Freiheit 36, located in a side street to the iconic Reeperbahn. This venue with the traditional Kiez flair has hosted a variety of different bands over the past decades but also serves as a club on days where there is no concert scheduled. There are several clubs and concert venues in this area, and in fact, this particular street even has a historic value as it was here The Beatles played their first gigs in the 1960s and rose to fame subsequently!

If you want to get a real feel for the atmosphere on the streets of St Pauli (with regards to music), the Reeperbahn Festival poses the perfect opportunity. It is a 3-day club festival that took place for the first time in 2006 and has offered a stage to lots of rather un-known artists every year since then. With over 70 venues taking part, you can just hop from venue to venue to explore different genres, and then maybe you’ll discover something you really like. The festival, which also features art exhibitions, takes place every year in September.

Hamburg has, what is more, even lent its name to an original type of alternative music called Hamburger Schule (“Hamburg School”). This music is mainly characterised by German lyrics which are often ascribed a high intellectual value – a good reason to improve one’s German! Contemporary representatives include Tomte, Kettcar, Die Sterne and Tocotronic.