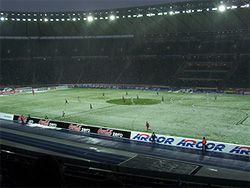 Saturday November 10th ended up being a pretty special day for me here in Berlin. Not only did Berlin experience its first snow of the winter (if you can really class early November as winter!), but the school managed to get us reduced prices for the football game at the Olympic Stadium. The local team, Hertha BSC played (and beat) Hannover 96! The atmosphere was great. It was a bit cold, but nobody really noticed.

As a group we met up at the underground station at Zoologischer Garten and took the tube directly to the stadium. Extra trains were laid on, so even though they were pretty packed with boisterous, high-spirited Hertha fans, we had no problems getting to the stadium. Football in Germany is as much as religion as it is in England (where I’m from) and there’s that same goose bumps feeing as you join the masses heading for the stadium.

And what a stadium! Anyone who watched the 2006 World Cup final has seen it on TV, but it really is something special. You can see it from miles away and as you get closer you start to realise how big it really is.

The snow caused some problems for the players and the game could have been prettier, but it was well worth the € 5 we paid for our tickets. There’s no way you could see an English Premier League game for less than a fiver! And Hertha BSC won, so all the home fans got to go home happy with their team in the top half of the table.

All in all, we had a really enjoyable day out. And the first, but hopefully not last, snow of the winter. I’ve heard from teachers at our school and other students that Berlin is absolutely magical as Christmas approaches. There’s snow, Christmas markets, Glühwein (mulled wine) and interesting biscuits and sweets. I’m really looking forward to it! I might wait until spring’s here for my next football game, though.