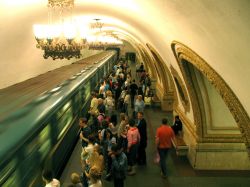 Ever seen a tube station with crystal chandeliers hanging down from the roof? I have!

One of my favourite places in the world is Moscow. There are many reasons to love this fantastic city: the people on the busy Tverskaya shopping street, the small shops selling hot pirogs, the amazing Red Square and the delicious Borcsh you can eat late of an evening in one of the local restaurants.

But it was when I stepped down into the Metro on my first trip that I really fell in love with the city. It was during my stay at the Russian school in Moscow. In most cities the metro is either a labyrinth of graffiti covered walls or simply a really boring, crowded place that you wish to leave as soon as possible. In Moscow – not so!

Every metro station in Moscow is like a whole world. The walls are beautiful, the pillars high. You almost break your neck when you try to look up in the ceiling. Stepping down into the metro is like stepping in to a ballroom, a gallery and a church at the same time.

I’ve been to Moscow no less than 3 times. And I’m planning to go a fourth. It’s lovely there now in the spring time! When I get there I’ll probably take the metro straight to Park Kultury and pop my head up at the Gorky Park. With the Ferris wheel and the Russian sailors in the background I’ll eat my pirog trying to find out how to master the so far mysterious Russian alphabet.