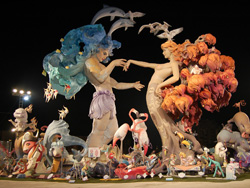 If you are interested in cultural festivals in other countries, the lively and colourful spring festival Las Fallas (Valencian: Las Falles) in the Spanish city of Valencia should be on the top of your list. You will be delighted by this spectacle and it will give you a unique insight into the Valencian culture!

The festival, which is also known as Las Falles de San José (The Falles of Saint Joseph) was even declared a UNESCO Intangible Cultural Heritage of Humanity in 2016. The locals celebrate this festival every year in March with the main festivities taking place between the 15th and 19th of March. 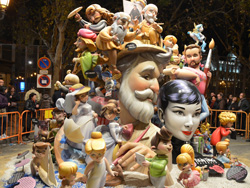 In preparation for the festival Valencians produce huge, multi-coloured sculptures made of papier mâché which are called

Fallas (or: Falles). At the end of the festival these sculptures, as sad or impressive as it may sound, fall victim to a big fire! 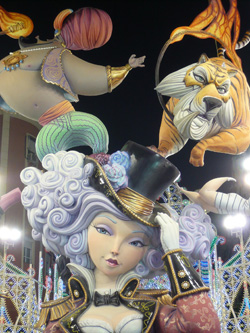 The Valencian word plantá describes the setting up of the Fallas during the night of 15th to 16th March. During this night more than 700 impressive Fallas are set up in the streets and on the squares of the city. To make sure that the Fallas do not fall they are braced with a wood structure.

The Fallas usually consist of several sculptures which are called Ninots. Most of the Fallas are supposed to convey a certain message to the spectator. They often satirically express criticism of policies or social conditions or make fun of famous personalities. On the Llibret attached to each Falla you can find the theme and an explanation of the respective Falla written in Valencian. The Fallas always remind me of the sculptures on top of the floats participating in the Rosenmontagszug in my home town Cologne. 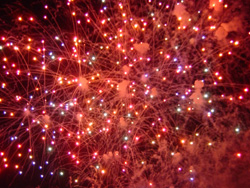 As I mentioned before, the main festivities take place between the 15th and 19th of March. However, from the 1st of March daily Mascletás take place at 2 pm. These are deafening fireworks on the Plaza del Ayuntamiento (town hall square) in the very heart of the city.

If you view this from above you can see the whole town hall square covered in smoke. These daily fireworks have no beautiful colours to offer though. It is really about the noise from the pyrotechnic celebrations, which even leads to the town hall’s windows shaking! 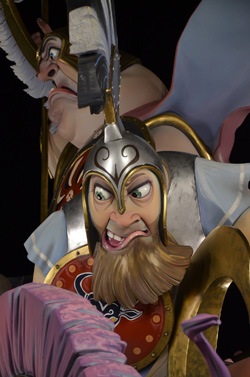 All Fallas are designed and set up by different Fallas committees and the various neighbourhoods often have their own Falla. Every year the best of all Fallas wins a prize. Therefore, on the morning of 17th March the members of the Fallas committees, the Falleros, meet on the Plaza del Ayuntamiento to wait for the decision of the jury.

The award-winning Falla is also the only one that will be pardoned and not burnt at the end of the festivities but will be displayed in the Museo Fallero (Fallas Museum) instead. Why not visit this museum during your next Spanish course in Valencia, where you will get to know everything about the origins of the Fallas and can marvel at all the award-winning sculptures!

On the 17th of March from 4 pm there will also be the Ofrenda de Flores (flower offering) when the Falleros hold a procession from their neighbourhoods to the Plaza de la Virgen, where they offer the Virgen de los Desamparados (Virgin of the unprotected) lots of flowers. The bouquets of flowers are stuck to the dress of a 15 meter high statue which is specifically set up for this occasion. At the end of the day you will be able to admire the virgin’s beautiful dress decorated with flowers!

Between the 15th and 18th of March there are colourful firework displays every day. However, the most spectacular one is the Nit del foc (Night of fire). This is Valencia’s biggest, most exciting and most beautiful firework display of the year. During the Nit del foc more than 4,000 kilos of pyrotechnic articles are shot into the sky. You will have the chance to enjoy this spectacle together with the locals for 30 minutes and will surely be delighted by all these colours that light the night sky above Valencia! 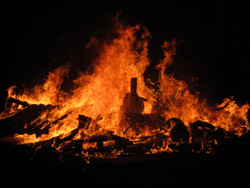 The Cremá means the end of the colourful and impressive Fallas. In the evening of 19th March all Fallas go up in flames. First of all the Valencians burn the children’s Fallas before they also throw the adults’ artworks into the flames.

Personally, I think it’s a shame that the artistic sculptures in which people put so much effort are all destroyed. The Cremá is an integral part of the Fallas though and is also firmly attached to the history of this spring festival, about which I would also like to tell you more in this blog post. 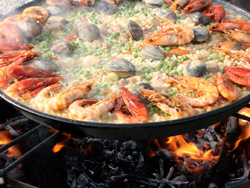 Aside from the above-mentioned highlights of the festival you will have even more opportunities to immerse yourself in the Valencian culture. During the day you can listen to bands marching through the city and playing traditional music. Whilst enjoying this music you can also admire the Falleros who, young and old alike, wear beautiful, traditional costumes.

If you are in love with the local cuisine then you should go and see one of the paella competitions. And of course, you should definitely eat a delicious paella yourself. The paella is a dish that originated in Valencia and one of the best dishes I have ever eaten! In addition to the basic ingredients rice, oil, saffron and garlic you will find vegetables as well as chicken and rabbit meat in the typical Paella Valenciana.

In the evenings music lovers can go to one of the concerts which take place as part of the Fallas. Locals and tourists alike can celebrate together and have a good time!

The origins of the Fallas

The festival traces back to the city’s carpenters. During the dark winter months they used wood racks on which they could put their oil lamps. At the end of winter they burnt these on the streets. From time to time more and more people joined the carpenters and burnt their wood residues outside of their houses and soon people agreed to settle a certain date for these burnings. The 19th of March was very suitable as it is the Day of Saint Joseph, the patron saint of the carpenters. At some point people started to decorate the wood residues with cloth before burning them. This is how the ninots were brought into being. Over time this custom developed until people finally started to build larger sculptures, the Fallas. Today with the burning of the Fallas the Valencians want to say goodbye to winter and festively welcome spring. 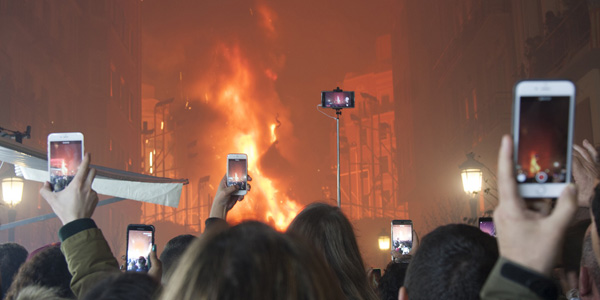 If you take a language course at our Spanish school in Valencia during the Fallas you should definitely participate in the wonderful celebrations to receive an extra dose of Spanish culture! 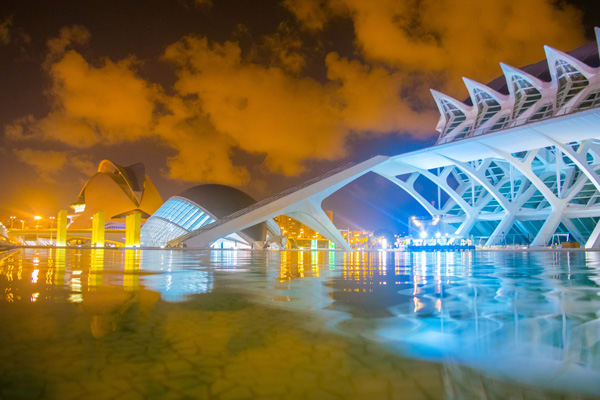