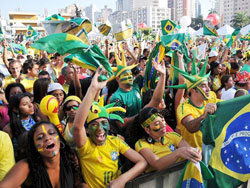 As the world looks towards the world cup in Brazil we also take a look at other major events and festivals coming up this summer. If these fascinating destinations are still not on your list, then don’t forget that we offer in-country language courses in 13 different languages and an incredible 159 cities!

12th June – 13th July:
In case you missed it, the pinnacle of the world’s most popular sport is taking place in Brazil – a whole month of the best football players in the world playing for their respective countries. Find out more about our Portuguese courses in Rio, Sao Paulo, Salvador and Maceio. 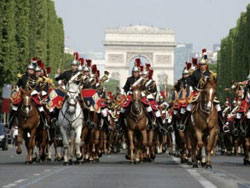 2nd July and 16th August:
This horse race has deep Tuscan roots, dating back to the 14th century. Il Palio (or the banner) attracts thousands of visitors every year to Siena’s Old Town where local riders race around one of Europe’s greatest medieval squares.

4th July:
The Fourth of July is all about Stars and Stripes. The United States will shine in red, blue and white when Americans celebrate this year’s 238th anniversary of the Declaration of Independence and the birth of their nation.

Bastille Day – All of France

14th July:
Vive la France! is the yearly motto for France’s national holiday. La Fête Nationale Includes the oldest and largest regular military parade in Europe with the spectacular highlight being the aerobatic show of the French Acrobatic Patrol painting the French colours into the sky.

6-15 July:
This festival is a combination of tradition, danger and exuberance. While the festivities last for one week the most important day is 7th July when thousands of locals and tourists watch the (controversial) encierro or the running of the bulls in Pamplona, Spain.

20th July:
The celebration of the independence from Spanish colonialists includes festivals and events which are held all over the country. In Colombia’s capital Bogota there will be a military parade and speeches to commemorate Colombian’s fight for independence in 1810. 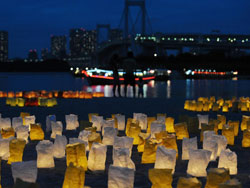 21st July:
Japan’s national holiday Marine Day commemorates the historic sea voyage of the emperor and is celebrated this year on the 21st July. Nowadays many ocean-related festivities take place to emphasize the importance of the sea to Japan and to raise awareness for marine environmental issues.

28th July:
Peru not only celebrates its independence from Spanish rulers on one, but on three days in July! The Fiestas Patrias peruanas (Peruvian National Holidays) are celebrated with great passion of the Peruvian people and each year’s highlight is the address to the Nation given by the President of Peru.

1st – 25th August:
The story of the Fringe dates back to theatre groups in 1947 who turned up uninvited (hence on the fringe) to the Edinburgh International Festival – to celebrate and enrich European cultural life after the Second World War. In 2013 there were 45,464 performances of 2,871 shows – now it’s regarded as the largest arts festival on Earth!

10th August:
Ecuador’s capital Quito was the place where the protest against colonialism started and to this day the city holds the largest festivities to celebrate the Independence Day of Ecuador with fairs, dance performance, military parades and speeches. 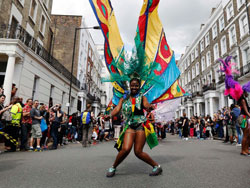 25th August:
While many countries around the world celebrate carnival in early spring, London hosts one the biggest street festivals in the heat of summer. Colourful costumes clash with the Caribbean atmosphere and amazingly detailed floats meet Calypso music in the streets of Notting Hill.

27th August:
Each year the small town of Buñol, close to Valencia, hosts one of the most exciting food festivals in the world. While it starts like any other food festival, with cooking contests and food fairs, the highlight of this week-long party marks the “World’s Biggest Food Fight” where thousands of locals and tourists throw over-ripe tomatoes at each other.